Much is made of diet and exercise, which are unquestionably essential to good health, but who necessarily thinks of prescribed amounts of nature as part of the better health equation? Remember the old Food Pyramid showing the kinds and amounts of food that were considered healthy? Pretty sure it’s been revised, but the power of an easy-to-digest (pardon the pun) visual is still useful. Now someone has brilliantly come up with a Nature Pyramid.

I absolutely love this idea because the whole premise validates that nature is in fact valuable to human health and wellbeing. This concept was created by University of Virginia researchers at The Biophilic Cities Project a few years ago, and I originally read about it in Florence Williams’ book published earlier this year, The Nature Fix: Why Nature Makes Us Happier, Healthier and More Creative, which is an engaging exploration of research in countries all over the world that supports her book title thesis.

As described by Dr. Timothy Beatley, UVA Teresa Heinz Professor of Sustainable Communities, the Nature Pyramid that he and a colleague created include four components. (To get the entire explanation, read his the full blog about this). Here’s the synopsis of the Nature Pyramid’s recommended “doses” of nature (see Beatley’s graphic below):

________Bottom/Daily: The bottom, largest section, suggests that people need to have environmental experiences on a daily basis, though they need only be simple.  A breath of fresh air, sitting in a park, walking through one’s neighborhood, or even just exposure to houseplant greenery, watching birds or interacting with pets seem to be valuable to overall wellbeing.

______Weekly: Next up, the pyramid shows the need for deeper immersions to areas like parks or waterways or generally any outdoors destination where one can, for at least an hour per week, escape the sounds and hassles of city life. While relatively brief, these excursions help clear the head and have been shown to lower blood pressure and reduce stress.

____Monthly: The next level up calls for even more concentrated doses of nature, about once a month, to enjoy and gain the greater benefits of getaways to destinations such as forests or other natural areas, that provide even more quiet, restful (or active) escapist experiences with even longer lasting effects.

__Top/Annually or Bi-annually: Finally, at the pinnacle of this Nature Pyramid are the less common, but essential, doses of wilderness experiences that take a person completely away from their usual environments. While excursions like this may only occur once per year or even bi-yearly, these kinds of trips, say researchers, can have profound and transformative effects on our spiritual, emotional and physical wellbeing.

So there you have it. Personally, I think the Nature Pyramid is a cool idea.  And while there is plenty of science behind its intent (Williams’ book is filled with the work of researchers that measure exposure to nature on endorphins, brain scans, and psychological responses), to me, more than anything, it’s a wonderful guide for what most of us probably know intuitively: That connecting to nature in small and big ways -- even if it’s just getting outdoors, going to a park, taking a hike in the woods or a run along the beach -- is not only simply enjoyable, but truly restorative to one’s health and spirit.  So get out there! 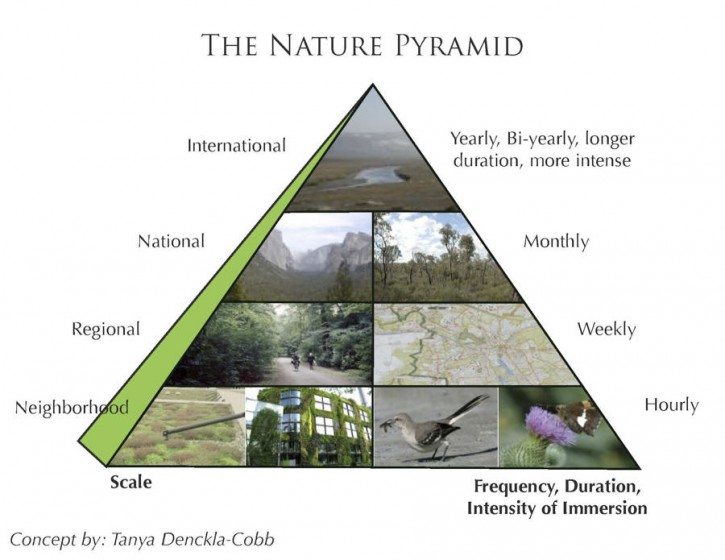